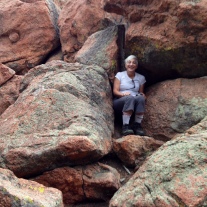 WELCOME THIS MONTH TO OUR NEW SUBSCRIBERS FROM CARLSBAD MEDICAL CENTER!

On July 4th, I stepped out of the Denver Airport and into my daughter, Korey’s, car. Her first words were, “You wore hiking boots?” As in, “How embarrassing. What about this is appropriate traveling couture for Bobbe?” She told me we were going to hike, so I was ready. Besides, it saved about 13 pounds of dead weight in my suitcase. Back home, the neighbors were asking similar questions. Have you ever tried to break in a pair of hiking boots? For weeks, I had dog walked in them, mowed the lawn in them, and tromped through the house in them. Not pretty, but necessary.

Korey selected Devil’s Head, an hour from Denver, with her friend Laura, a flight attendant on a layover. A fun, little climb to the piece de resistance, Fire Tower Lookout, which apparently offers a glorious 360 degree view at the top. What they don’t tell you is that if the 2.8 mile hike doesn’t kill you, the ascent to the top, the 143 additional steps to the top will.

We began. “Here we go! What a great little workout this is going to be!” I proclaimed. Frequent trips to the gym for weeks, coupled with fervent dog walks, morning and evening, had prepared this body into optimal condition. Or so I thought. Shortly, I felt a winded. It was just that altitude change from Illinois to Colorado. Then the fatigue set in to the hamstrings. I suggested we pause to take a group selfie (i.e. rest). We resumed the hike. A few minutes later, it began to feel as if I was having a mammogram on my lungs and my legs were somebody else’s. Except the ache was real and it was mine. Waves of nausea swam around my head, which, was starting to feel like I had on horse blinders. You know, that feeling right before you pass out? Korey and Laura stopped graciously. And often. Progress was slow, but steady. At this rate, it would be the 5th of July before we were off this devil of a mountain. Chatter from other hikers spoke of the mid-way point ahead. “WHAT?” There was no way we’d only walked 1.4 miles. NO WAY. “I’ve got this!” I assured the girls, but a disappointed, defeated realization washed over me. “I can’t do this. this. Korey said, “Mom, if that guy with the beer belly can make it, surely you can.” But I could not. And I knew it was true. I waved the girls on, and waited for their descent.
Herds of hikers walked past. Old men and women, children, toddlers even,both fit and fat people paraded by me, looking like they were having fun; excited to see the glorious view at the top.
After recovering at midpoint, I took photos for families and their friends. The parade of people started trickling back down the mountain. How about that 85 year old woman that had made it? And, oh my, the the variety of dogs! If being out-hiked by the old woman didn’t level my esteem, the dachshund definitely did. With those short little legs? I’m such a slacker. But the real humbler was the Chihuahua. How is it that a pooch with less muscle on it than a chicken wing could conquer this mountain? It started to thunder and drizzle; I took cover in a rock formation until the girls found me.

I am happy to report the descent back down to the car was easy-peasy. The realization that no matter how determined, prepared or competitive I thought I was, the goddess, “Miss Altitude,” rules! Don’t ever doubt the she-devil of the hike. She will bring you to your knees. Granted, a hike on my first day in the mountains was a poor choice, but I doubt day 2, 3 or 4 would’ve been much better. Maybe a thimble-full of oxygen better. Maybe. The smartest and hardest thing to admit: when enough is enough. And it was. Best decision ever. Final score? Mother nature: 1, Bobbe: 0. If I had a a white flag, I’d stake it at the midway point. bw

Age might slow us down but it sure helps with decision making! You put a smile on my face and and reminder in my head…enough IS enough sometimes and that’s ok!

Oh Bobbe… when I read this I was visualizing myself hiking up that mountain and I was completely worn out just reading your post. lol..(not kidding). I’m sure the change in altitude had something to do with your experience and I agree that we all need to know when “enough is enough.” Any just for the record… I would have done the same thing with the hiking boots! wink, wink.