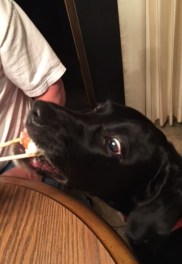 Ten years ago, my son, Nick, and I brought home a free, scruffy-eared puppy. She was a mix between a Llewellyn Setter and a Labrador. The breeders hadn’t planned on such a mix and couldn’t jeopardize their reputation by selling anything less than a purebred. Like we cared. Jeff put his foot down on several house rules. The one of which he was most adamant was, “NO TABLE FOOD!”

Four years later, that changed and we weren’t exactly sure why. Then Jeff told this story. In the dog days of August, Jeff set out for the duck camp to treat the American Water Weeds on the lake, with chemicals. One can never begin preparing too early for the duck season, you know.  (It lasts about thirteen months in our family…) Jeff hooked up his chest waters and entered the deep water. The bottom of the lake was thick silt. As he stepped through a known low spot, he felt his boot sink into the silt. It literally grabs and holds your boot. The pressure was similar to quicksand, except he wasn’t being sucked down. He was just stuck in the mud. He was in deep sh*t, you might say. Lily White, the black Lab was swimming and playing, as usual.

Jeff weighed his options, none of which were viable. If he didn’t figure out something soon, he’d be a stick in the mud until we started looking for him. That would likely have been hours and hours later. There wasn’t anyone else around to help. Except for Lily. My guess is that Jeff’s voice, normally strong and resonant, had a tone of alarm to it. She dog-paddled back to him and made a 180 degree turn. He grabbed her collar. She started swimming furiously towards the shore. He pulled back against the resistance until his boot popped out and away from the silt trap.  Jeff was then able to make it easily back to shore.

Lily is ten now. She still loves the water, but tires more quickly. Her coat is still soft and shiny black. Considering she’s 70-ish in dog years, she really doesn’t look it, aside from some gray on her muzzle. Jeff thought Lily deserved whatever food she wanted after this rescue. This dog now enjoys occasional table leftover treats. No doubt, the leftover salmon is good for her (and her coat!) as is chicken. Boneless. Last night took the prize however. Lily actually liked a couple of remaining pieces of sushi. California and Philly rolls. She insisted on chopsticks.  Anything, Lily, anything.