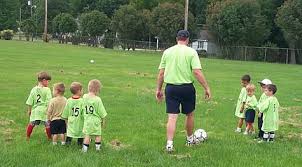 Ahhhhh, spring and summer sports. To a child, it’s like Christmas. Hear them singing?

“T-balls roasting in the summer sun…”

“Deck the pool with lots of chlorine, fa-la-la-la-la…”

“Tennis balls are coming to town!”

What an exciting time! There are uniforms to buy, schedules and transportation to coordinate, and some weeks, it’s your turn to take treats. YAY.  If you’ve not participated at some level, pull over next to a baseball field or park and watch newbies in any sport. It’s cheap entertainment.

Here’s what you may witness:

T-Ball: It’s been too long, but I think everybody gets “at bats”. A game ends after a set time. They may not keep score, which is just peachy for peewees.

Softball: A softball Olympian now coaches her son’s baseball team. Are her expectations unrealistic? Nope! She understands seven-year-olds want to dogpile at third base, or in the outfield. She smiled when a batter got a hit, then ran to third base, instead of first. When asked, he answered, “Well, nobody was on third and somebody told me it’s closer than running to first anyway.” Logical.

Tennis:  I taught tennis for the City of Winter Park, FL. It lasted a month. Seemed like a year. The upside: chasing a million stray balls was slimming. The downside: fifteen (seemed like fifty) children returning balls at my head was risky business.

Golf: For years, Dad helped junior golfers. Irv loved Tuesday mornings. He had the patience of a saint and encouraged every effort. He understood sand traps fascinated little kids and that you ALWAYS stand back when the clubs are swinging. Remember, they just MIGHT hit a ball and flip it back over their heads or ricochet off an old oak tree. Dad wanted kids to love golf, like he did. Parents were appreciative. (Because Dad got them off the hook, maybe?)

Soccer: One dad-coach, had a half-time pep talk. Hot and tired kids sprawled on parents’ laps. “Team, we’ve got one goal and one goal only for the second half. Our goal is to have at least ONE players on the field by the end of the game!” Lofty goal. Our daughter was only in it for the end-of-season pizza party. Whatever.

Swimming:   Swim class/team resembles a gaggle of guppies. They’re in perpetual motion, resembling Minions in their goggles. Within fifteen minutes, everyone is shivering. And it’s 97 degrees that day. Little bodies are so darn slippery, they slither from your grasp and scramble up the ladder. That’s because they have to go to the bathroom. Again. It’s all that water. Unlike the above sports, however, at least they finish cleaner than they started.

If you have coached in the past, thank you. If you get asked, say, “Yes.” It’s a season, for heaven’s sake, not a ten-year contract. Batter up! 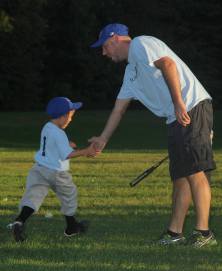